God keeps surprising me in this Living Your Word of the Year Challenge; I think I am headed one direction, and end up in another. I also found so much to challenge me that had time permitted, I would have had at least a half dozen pages. It was so hard to stop, but I finally realized that the project was not just about making pages, but letting the Word and the various quotes/songs/thoughts I found, seep in and change me.

The first page became a meditational activity as I wrote listen over and over again, and I found myself listening for God’s voice in a more purposeful way than I have before. I hope that this is something I can cultivate as a habit. Often when I am actively listening for God to speak I am looking to hear something about a specific situation or request. I have heard people recommend that we spend time just quietly listening for God in our morning devotional time. Whether it’s my ADHD brain or just impatience, that has not worked well for me. But trying to keep an attitude of attentiveness to what God might be saying to me … this resonates far more with me. It also seems less like I’m trying to control God, asking him to speak with me at my programmed time, or at my convenience…

Music with lyrics having to do with listening or hearing was constantly going through my mind. I learned the song whose lyrics I placed on the third page, while raised in the Catholic church. I had no idea, until I attended a bat mitzvah a couple of years ago as part of a multicultural counseling class I took for my masters degree, that the tune was originally a Torah song, and this was how I heard it at the Bat Mitzvah. The synagogue had graciously given me a host to explain things, and afterwards, he told me an amazing story about one of the sets of scrolls the synagogue owned. It gave me an amazing understanding of God’s faithfulness and trustworthiness. I wish there were room to include it here! 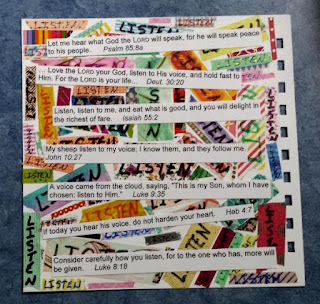 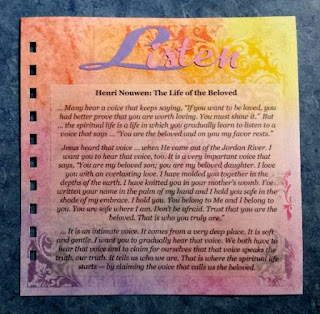 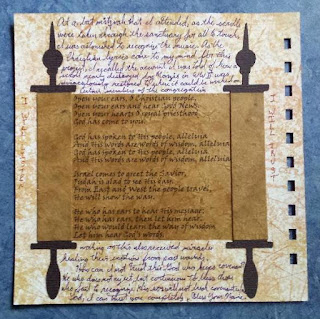 Design notes:
I expected the first page to be a fairly easy and quick project. Wrong!  It took hours. Part of it was my fault for putting some pieces at angles, making placing far too complicated/time consuming. When I laid the text strips across the page, too many white gaps presented, so I had to redo a good bit of it. Secondly, not all washi tape is, well, washi tape! Washi tape is supposed to be made from rice paper, and when it is, a Sharpie will write nicely on it.  Unfortunately, I had a lot of “bargain” tape that was impossible and had to be removed. Bargain tape is often also not easily removable, and it tore some of the cardstock when I tried removing it.

I was really excited about my background idea.  I generally only use chalk to fill in a stamped image, using a wooden q-tip. For this, I just slathered the chalk on, then used a tissue to spread and blend.  Then I took a large square stamp (a Cover-a-card stamp from Impression Obsession), placed it on my stamping platform, and inked it with versamark ink. This was a subtle but impressive look, as the stamped image made the chalk a bit darker. Then I took small stamp pads and colored sections of the cover-a-cards stamp, then restamped the image. This worked beautifully.  I made several other panels, and then made a disastrous decision: I sprayed them all with a fixative so the chalk would not get over all the other pages when I assembled my journal.  Unfortunately, it completely obliterated all areas of the image that were versamark only. Sigh.
Posted by Sarosa at Monday, June 17, 2019

Wow! I enjoyed reading about your process - both in the Word and with your art. What wonderful interaction you have had with your word and the Word. :)

Thanks so much for stopping by! I no longer have my website, but if you are interested in purchasing cards or journals from me, please e-mail me at Sarosa1@verizon.net.

Sarosa
My name is Sarah Kornhaus, and I live in the southern tier of Western NY, a beautiful, rural area five hours from NYC. The Lord has truly blessed me with a terrific husband, four wonderful children, two terrific sons-in-law and a darling granddaughter! I've recently received my master's in Clinical Mental Health Counseling. I generally post as "Sarosa" on message boards. :-) 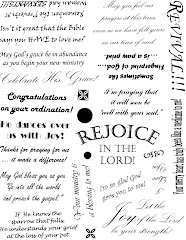